It Was Funny Until... 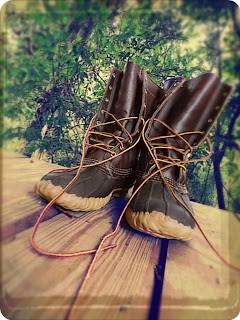 I saw these little doggies.

See, there was this picture in a magazine the other day and even though I oughta know better, I snickered at the woman's boots.  Can you even believe it?!

Within a day or so, however, while at my third favorite place to be, I saw not the same pair, but a pair resembling closely enough that I was taken aback.  And then I was moved a-forward. Toward them.  I bought them.  For $2.

Yes, yes.  I've been meditating on just what that says about me that I could turn on a two-bill for a boot.  And I hope those thoughts work themselves out, show themselves off over at The Bending Tree.

But today is the first day of fall y'all and, for me, that means breakin' out the boots!  I'm celebrating the start of this new season and y'all should do the same...even if your boots are funny lookin'.
Posted by Amanda Parish at 1:59 PM