I trust that by now I've raised your level of expectation regarding the photography aspect of this blog to that of greatest awfulticity.  And so, in my sincere desire never to disappoint, here is my latest installment. 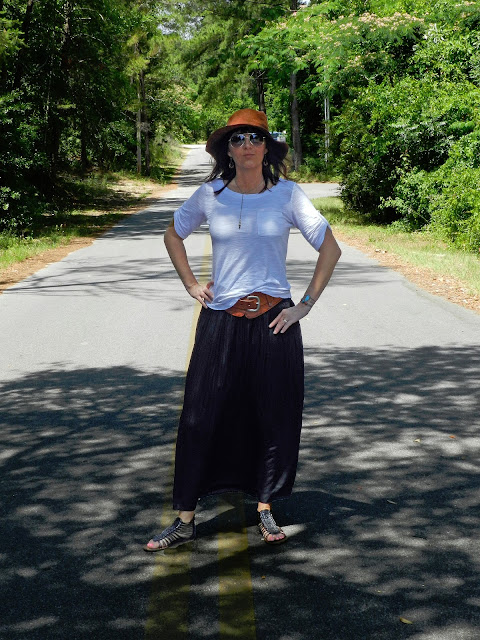 But listen, for real.  As bad as that looks, it turned out to be one of my best attempts ever, ensemble-wise.  I left the house with confidence and zeal because that is the baddest hat on the planet.  But also because I'd driven ten hours to obtain the hat, there was a certain joy in having finally figured out what to do with it.

See, there's this event that happens twice a year in Gay, Georgia, that my mom, my sister, and I have been attending regularly since it started back in 1973.  The Cotton Pickin' Fair is like etsy, only live, and way better because it smells like farmland and biscuits and there's square dancin' and fiddlin' and cotton candy and an atmosphere that stirs what I know is my pioneer blood. 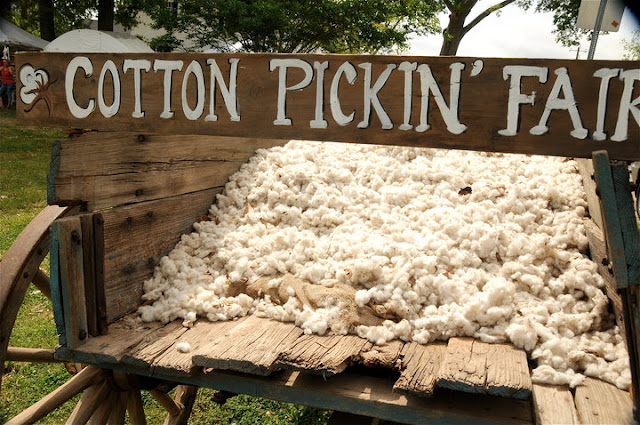 Before I moved to Florida, the fair was an hour-and-a-half away but now it's more like a five hour drive.  I go as much to breathe in that air in the company of my family as for anything else; however, there's no denying the allure of the craftsmen.  My rule is that purchases must be of things nowhere else to be found. 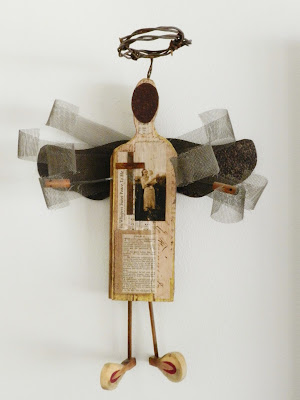 Here, I have to show you one of my favorites ~ an angel crafted from the bits of an old church salvaged somewhere in Alabama.


So anyhow, a couple of years ago, I stumbled across The Hat Peddler's wares, and across one hat in particular.  In my genuine attempt to be a conscientious shopper, I left and came back to the hat several times but eventually left the fair without it. What resulted was a year-long pining away and search for its nonexistent replacement.  Finally, I contacted the shop owner, described the hat, asked her to duplicate it, and made the ten hour round trip to obtain it (at the following fair.) 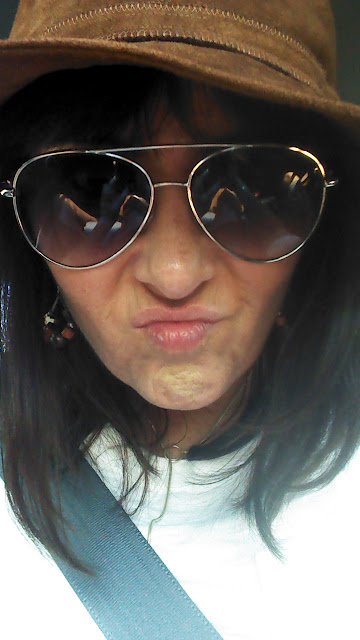 Did I already say it's the
baddest hat on the planet?

Anyhow, turns out the hat has stamina too because, whilst wearing it, the man and I excurded with both g'girls for what turned out to be a ten hour day.  Whew. 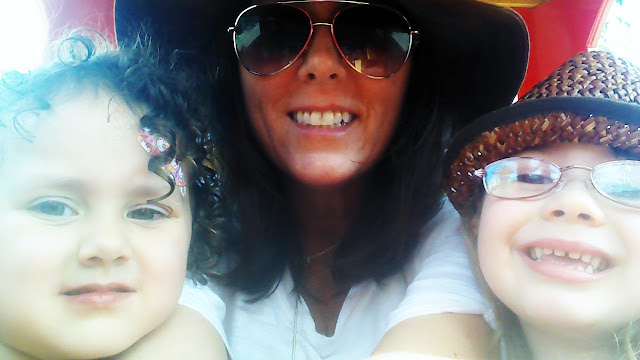 And speaking of my man ~ because I love him and want to honor him ~ though most of all, I want to acknowledge his comments about my hat, this one's for him...

You're so vain,
You probably think this
post
is about you...
Posted by Amanda Parish at 2:00 PM No comments:

I thought it would be about my boots.
Or about the absurdity of wearing them after the climate change. 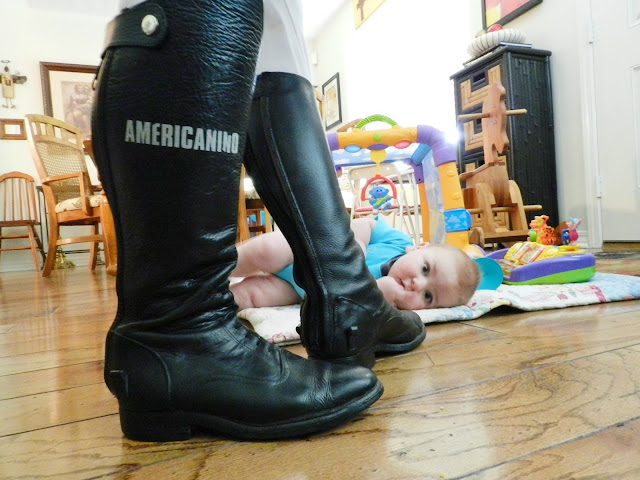 Or maybe about the validity of wearing white britches before Memorial day, even.

I thought I'd have a picture which highlighted my ability to rise above the clutter and chaos, resultant of keeping a three-year-old g'girl and a four-month-old g'boy entertained and trained.

But after 47 attempts and tinkers with the tripod and arranging the kidlets and closing the doors and telling honey hush, I knew I'd taken the very last one when g'girl said, "MeeMee, Pop is behind you making faces!"  Seriously, I just turned the camera off and went to edit. 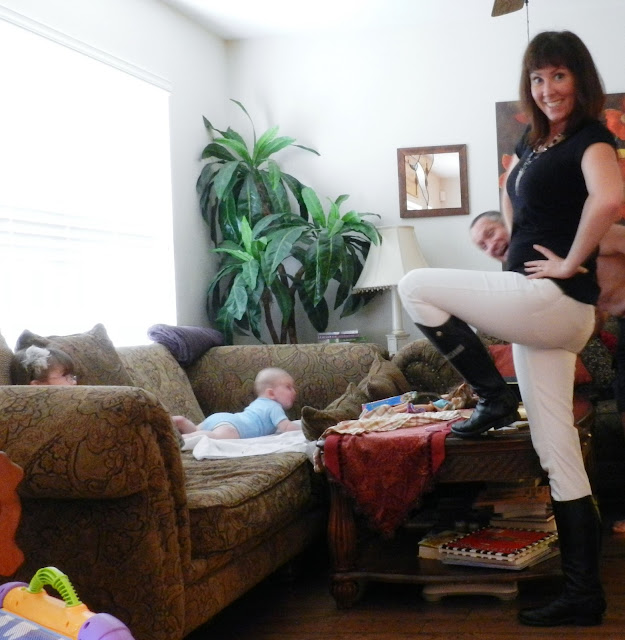 This is The Way - the way that it is.  I'm fiddlin' with a (ridiculous) hobby; honey is making fun; g'girl is singing like a bird; baby man is wondering what in the what he has gotten himself into.

By the way, the boots were $2; needed some work but were worth it; could not wait till fall.

Also for the record, honey's first response was to ask if I remember CHIPS.

Posted by Amanda Parish at 8:51 PM No comments:

The Fabric Of Our Lives

Okay, first off, I know how to party like a rock star.  I like biker boots and metal studs on any (or all) article(s) of my clothing.  I have tattoos.

So with that out of the way, this last weekend I went to church camp with a bunch of girls and made a quilt.

I can't tell you everything because, 1) I don't do that, and, 2) I hope those ladies have another one of these "spend the night in the woods, hand-stitching stuff" retreats and I don't want to spoil it for any who might attend.


But I also need to read mine to you. 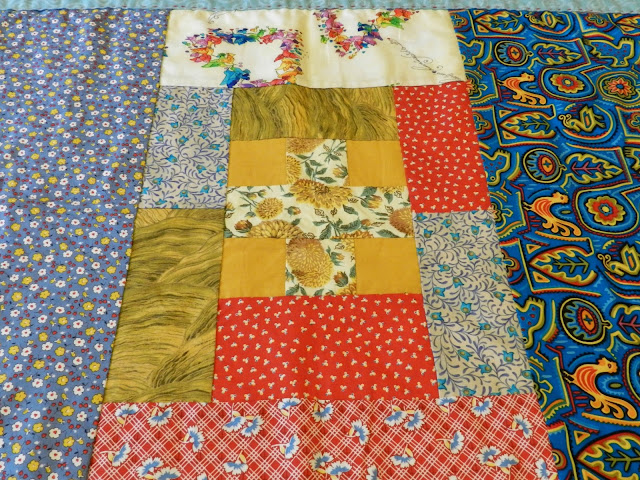 It's necessary that you know we heard a talk, first off.  It was about some things and about how we should choose fabrics for this thing in accordance with things that mean things to us.  Got that?

"Choose fabrics that have meaning."  And then the first step was to choose the starter kit...which was a bag containing the center cross portion, the six strips around it, the batting, and the backing.  Read:  we didn't have a lot of choice in that part of the assembly.  And we had a (necessary) time limit in which to pick it.

Now, I don't know if y'all've realized this by now, but I need stuff to mean stuff.  When they told me to choose fabrics that meant something, I was all up in that, you get what I'm sayin'?  But since I didn't have time to choose pieces that told my life story, I decided to tell a color story and it started with that darkest and most colorful piece.  I was enamored with that fabric and began to work everything else around it. ...

Meaning that I wound up acting a little like a diva or a completely spoiled brat.  In my defense, I saw another lady trade one piece of fabric between her starter kit and one of those kits not chosen so I didn't actually start it.  (pointless grin, here.)  Anyhow, I began a process of switch and switch and switch until I had everything just the way I wanted it ~ to tell my color story.  (One of the very gracious leaders kept assuring me that it was okay ~ they wanted me to be happy with it at the end.)

So it's also necessary for you to know that we heard another talk.  It was about how we don't always understand things while they are happening but often in the hindsight...and that's when I started to see.

First, I realized that my first favorite fabric was the first disciple1, Peter, the one with whom I most relate, that sometimes crazy-acting guy who did, in fact, turn out okay. This means something to me.


This is not just colorful, but living. 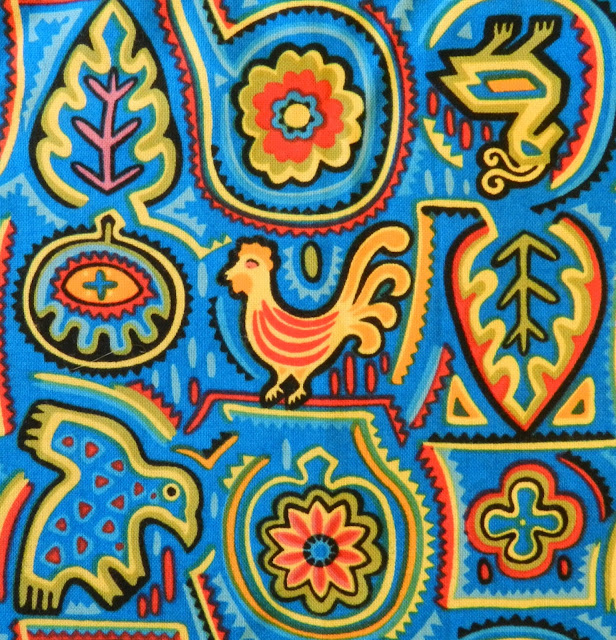 “Let not your heart be troubled; you believe in God, believe also in Me.
In My Father’s house are many mansions;
if it were not so, I would have told you.
I go to prepare a place for you."
John 14:1-2 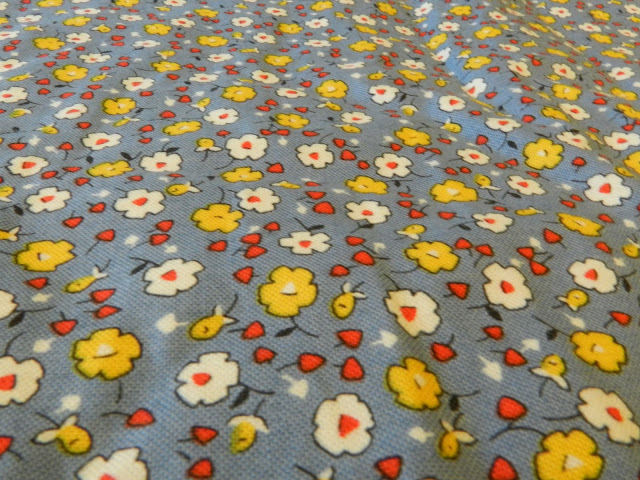 Here is my guiding scripture.

"I have been crucified with Christ;
it is no longer I who live, but Christ lives in me..."
Galatians 2:20 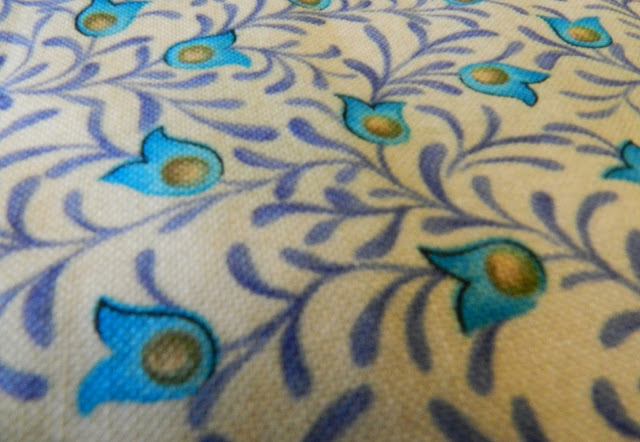 Here is one of my favorite passages, Psalm 139.
I suggest clicking through to read all of that one! 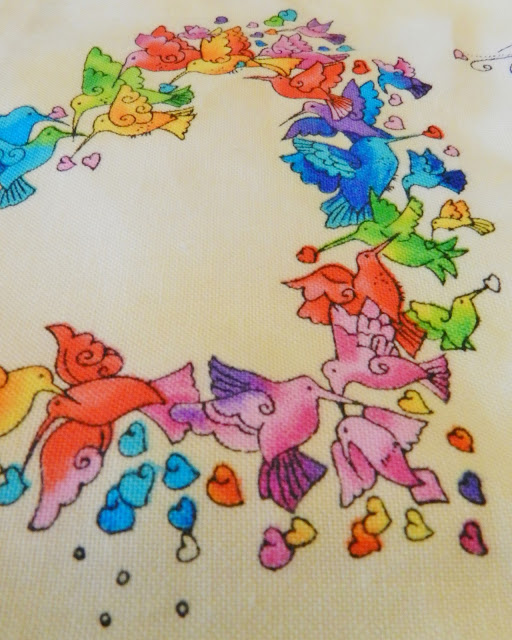 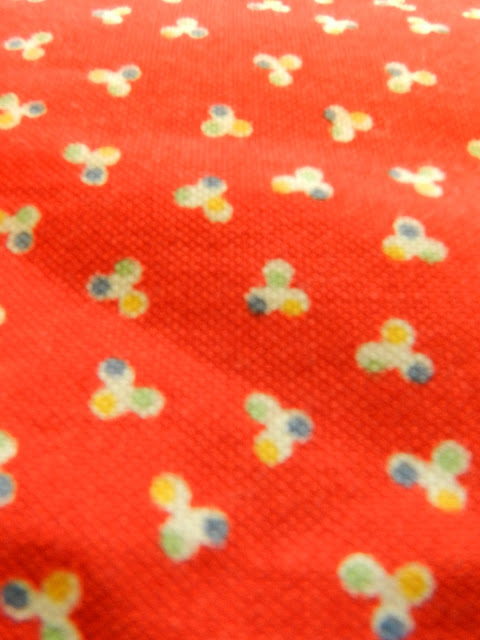 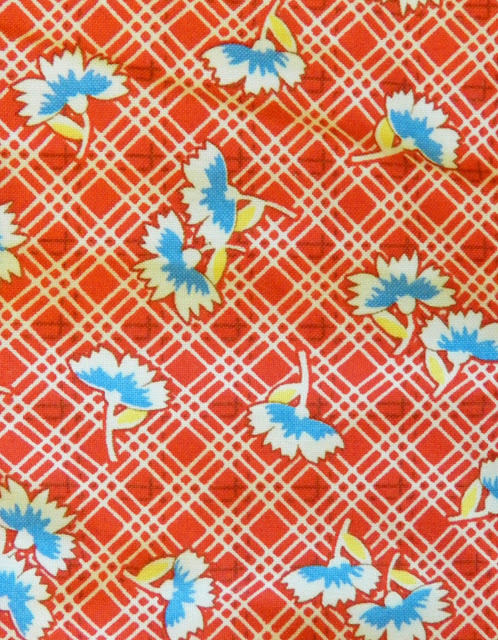 And the unknown future. 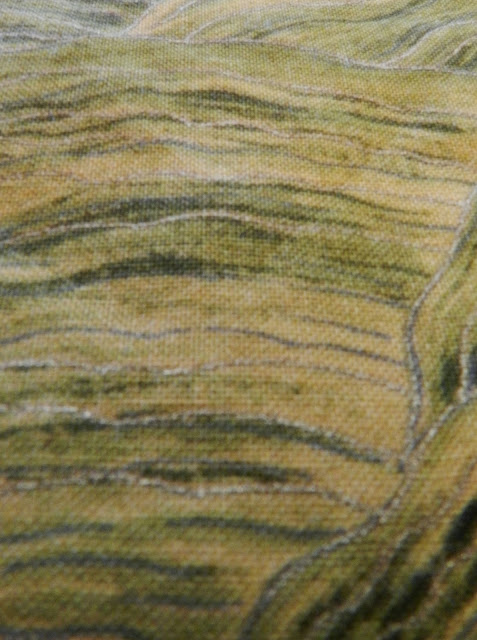 Unknown to me, that is.  And that brings me to the last piece, which happens to be (from) the first that I chose - that starter kit - and the piece that I actually liked the very least of all because I did not think it went with my story.  I did not know at the beginning of this process why it was, but I could not make myself replace that piece. 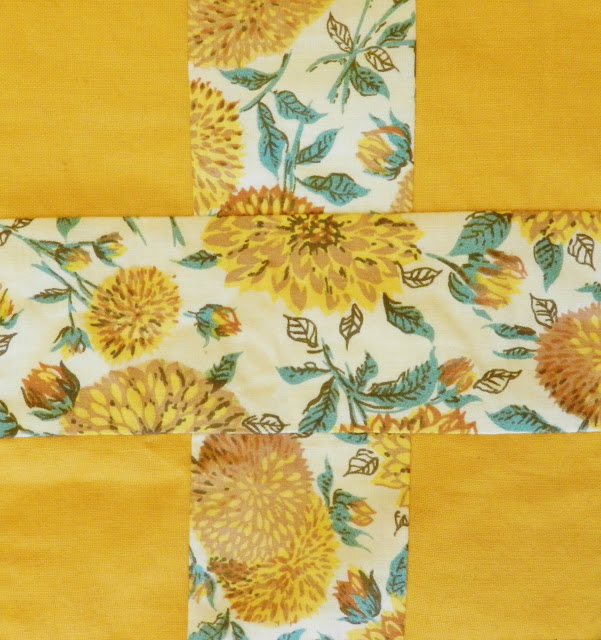 "In this you greatly rejoice, though now for a little while, if need be, you have been grieved by various trials,  that the genuineness of your faith, being much more precious than gold that perishes, though it is tested by fire, may be found to praise, honor, and glory at the revelation of Jesus Christ,  whom having not seen you love." 1 Peter 1:6-8

My genuine faith in Jesus Christ, more precious to me than gold, has always been at the center of it all.

And while I planned and planned (read:  attempted to control) this whole thing, only He knew where it was actually going.  In the end, "my patchwork has become God's artwork." Gemma Parmer 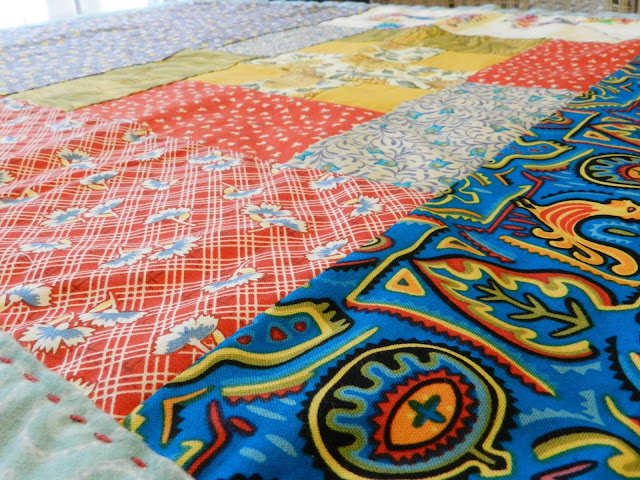 P.S. Those of us sitting right together kept trying to wind up each having a same piece of fabric in our quilts.  Finally, we chose a fabric that none of us had and did this so that we would leave that place carrying a piece of one another's hearts with us forever. 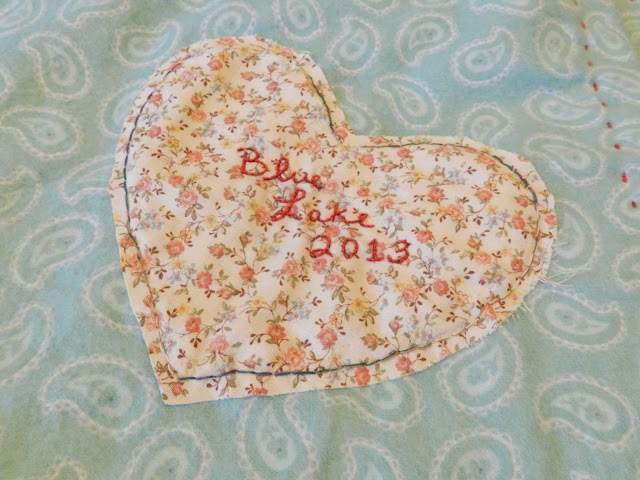 You May Now Party On!
For-ever, I pray!

1 I've since realized that Peter was not the actual very first Disciple, but you get it.

Posted by Amanda Parish at 1:59 PM No comments: