There Can Only Be One Number One...

...and this wasn't supposed to be it.

My very first post was supposed to be about a jumpsuit.  In case you're thinking that sounds suburban, domestic, boring - hold your horsies for just a second.  I found that hideous thing in a thrift shop and instantly thought, "Jumpsuit, you’re gonna make me famous someday." Because I know that I can turn that monstrosity into hip-nosity. I’ll show you someday. I promise.

But as I started working this whole thing out, coming to the unavoidable, inescapable truth that blogging and I are made for each other...well, I thought I oughta make some things clear right up front.

Recently, I came across someone’s bedroom photo journal. Ohhh, it was pretty and neutral and clean and organized and inspirational and peaceful. Thank goodness for women who can not only manage such things, but who are also willing to share their art and ability with the rest of us.

You just need to know...t’ain’t happenin’ over here. And since - supposedly - a picture is worth the thousand words that you probably wouldn’t read were I to go that route... 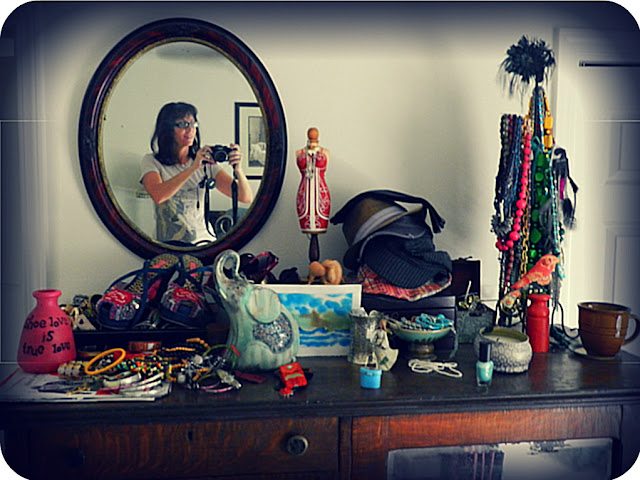 Here are a few things that your sense of ocularity may or may not lead you to conclude: I only removed my so-called manicure bag (because it's straight-up ugly) and the bits of my granddaughters' (yes, two) crackers before taking this.  The shirt I'm wearing has an unusual smell (it’s old ... so like aged cheese, maybe?)

But most important is that I brushed my teeth first and that’s how you know I care.
Posted by Amanda Parish at 10:05 PM No comments: